2 August 2021, Beijing - Swire Properties is pleased to announce that it will cooperate with the People's Government of Chaoyang District, Beijing Municipality and the Beijing Public Transport Corporation (BPTC) in relation to the transformation of a BPTC maintenance plant, situated to the north of its Taikoo Li Sanlitun development at No.2 Xindong Road, Chaoyang District in Beijing, into a cultural and commercial destination. The cooperation is a testament to Swire Properties' commitment to the long-term development of the Sanlitun Business Circle.

In accordance with Chinese President Xi Jinping's requests to phase out non-capital functions from the core area of Beijing, the District Government and BPTC entered into a strategic partnership framework agreement in 2017 with respect to the BPTC site. The framework cooperation agreement signed by the three parties today builds on this framework agreement. More importantly, it is a direct action to facilitate the joint efforts of the Ministry of Commerce and Beijing Municipality to establish Beijing as an international consumption hub. The aim is to regenerate and upgrade the BPTC site into a world-class location for "first" and flagship retail stores to elevate the business ecosystem and increase the appeal of the Greater Sanlitun Commercial District. Together, the three parties aspire to transform the site into a new commercial and cultural landmark that aligns with the capital city's functional positioning, providing an example of policy execution and giving substantial support for Beijing's transition into an international consumption hub.

Following the signing of this partnership framework agreement, the District Government, BPTC and Swire Properties will establish dedicated project teams to arrange regular communication and coordination meetings in relation to the project.

"As a key participant in the Sanlitun Business Circle, Swire Properties is proud to have established Taikoo Li Sanlitun as a trendsetting lifestyle destination in Beijing, as well as one of the core districts that represents Beijing's ‘first store' economy," said Tim Blackburn, Chief Executive Officer, Chinese Mainland of Swire Properties. "We are honoured to be participating in the long-term development of Chaoyang District, deepening our collaboration with the District Government and cooperating with the Beijing Public Transport Corporation. We are excited to have this opportunity to play our role in contributing to the Government's vision for the development of Cultural Sanlitun."

Drawing on its extensive experience and expertise in urban regeneration, as well as its creative approach to placemaking to transform neighbourhoods into vibrant and sustainable communities, Swire Properties will collaborate on the planning, design, positioning, operation and management aspects of the project.

Photo Caption:
Leaders from the Beijing Chaoyang District Government, Beijing Public Transport Corporation and Swire Properties today signed a framework cooperation agreement to transform a BPTC maintenance plant situated in the northern section of the Taikoo Li Sanlitun development, as part of their efforts to establish Beijing as an international consumption hub. 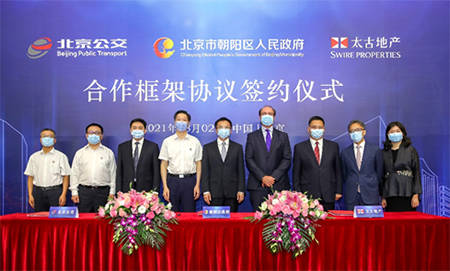 About Swire Properties
Swire Properties develops and manages commercial, retail, hotel and residential properties, with a particular focus on mixed-use developments in prime locations at major mass transportation intersections. Swire Properties is listed on the Main Board of the Stock Exchange of Hong Kong and its investment portfolio in Hong Kong comprises Taikoo Place, Cityplaza and Pacific Place. In addition to Hong Kong, the Company has investments in the Chinese Mainland, the United States, Indonesia and Vietnam.

In the Chinese Mainland, Swire Properties has six completed mixed-use developments in Beijing, Guangzhou, Chengdu and Shanghai, including Taikoo Li Qiantan, the retail project in Shanghai which is set to open in September 2021. The Company's attributable portfolio in the Chinese Mainland amounts to some 1,277,000 sqm.