Located in west Guangzhou, Liwan District is positioned as the "cradle of Lingnan culture" in the city and enjoys stunning scenery on the east and north banks of the Pearl River. The Julong Bay Area, as part of the Bai'etan (White Swan Pond) area, is positioned as the "West Central Business District" of Guangzhou, with strong development potential. Swire Properties intends to collaborate with PREG to create a new urban commercial and cultural destination which echoes the city's development vision and the intention to upgrade the city's urban landscape.

"Following the success of Taikoo Hui Guangzhou, we are excited about this opportunity to develop a second major project in Guangzhou, in a district that enjoys rich traditional Lingnan culture and huge commercial development potential," said Tim Blackburn, Chief Executive of Swire Properties. "The signing of the Cooperation LOI is a testament to Swire Properties' long-term commitment to Guangzhou and to the development of the Greater Bay Area. We are thrilled to have this opportunity to collaborate with PREG to explore the potential to develop a world-class commercial landmark, which will bring together the best of Lingnan culture, modern art and international trends in a stunning natural environment, contributing to the success of the ‘West Urban Living Room'."

PREG has developed a comprehensive development and management plan for the Julong Bay area, in accordance with President Xi Jinping's guidelines to "inject new vitality" into the old city of Guangzhou. Under the overall planning by the Guangzhou Municipal CPC Committee and Government, and led by the relevant municipal government departments and Liwan District, PREG is setting out to achieve the "four action plans": to further integrate urban functions; strengthen urban culture; further modernise the service industry; and cultivate an international business environment in Guangzhou. Together, these aim to create a "West Urban Living Room" in the Julong Bay Area, which organically blends culture, commerce, tourism, innovation and living.

"As the place where the ‘Canton Thirteen-hongs' (large trading houses) originated during the Qing dynasty, the Julong Bay Area today is the core area of the Guangzhou-Foshan metropolis circle in the Greater Bay Area, with a rich business history and an inherent commercial DNA. In this new era, PREG aspires to fully leverage the area's cultural heritage to bring in new industries and top-tier corporations in order to rejuvenate the Julong Bay Area's great business potential," said Gao Dongwang, Chairman of PREG. "This collaboration fully showcases the strength of PREG as the only enterprise with whole-industry-chain urban operation functions among state-owned enterprises in Guangzhou. Leveraging Swire Properties' vast experience in operating top-tier retail commercial projects, we will work together to create a new cultural and commercial landmark, and a world-class waterfront art hub in the Greater Bay Area."

Drawing on its extensive experience and expertise in commercial development and urban revitalisation, as well as its creative approach to transforming neighbourhoods into vibrant and sustainable communities, Swire Properties intends to collaborate with PREG on the planning, design, positioning, operation and management of the project. 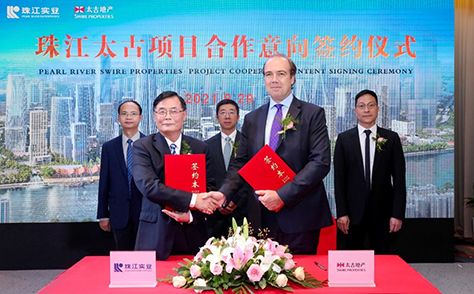 About Pearl River Enterprises Group
Founded in June 1979, Pearl River Enterprises Group (hereinafter, the "Company") was the first general contracting enterprise of China. Starting up with China's first Chinese-foreign joint venture five-star hotel - White Swan Hotel, the Company has been the general contractor of many landmarks in Guangzhou, including China Hotel Guangzhou, LN Garden Hotel, Guangzhou, and the Tianhe Sports Center. With total assets of over 100 billion yuan, the Company holds shares in 37 companies directly, and owns 20 high-tech enterprises, 2 national laboratories, and two listed companies (Pearl River Holding (securities code: 600684) and JSTI (securities code: 300284)), with many of its subsidies ranking top 50 in their respective industries in China. The Company has been a top 500 service enterprise in China for many consecutive years, and was chosen as a top 100 branded enterprise of Guangzhou and ranked fourth among the top 10 real estate developers of Guangzhou in 2021.

After more than 40 years of development, the Company has become a wholly state-funded large integrated smart city operation and service group in Guangzhou, the largest state-owned housing rental platform of Guangzhou, and the only enterprise with whole-industry-chain urban operation functions among state-owned enterprises in Guangzhou. Around the strategic positioning of the core smart city integrated operation platform of Guangzhou, and driven by marketization and quasi-nonprofit, the Company is focusing on the three business lines of urban development, industry park investment, financing, development and operation, and urban operations and services, accelerating the transformation to an integrated smart city operator, and endeavoring to become a model of smart city operator with powerful core competence, and strong industry and innovation momentums. (https://www.gzprg.com/)

About Swire Properties
Swire Properties develops and manages commercial, retail, hotel and residential properties, with a particular focus on mixed-use developments in prime locations at major mass transportation intersections. Swire Properties is listed on the Main Board of the Stock Exchange of Hong Kong and its investment portfolio in Hong Kong comprises Taikoo Place, Cityplaza and Pacific Place. In addition to Hong Kong, the Company has investments in the Chinese Mainland, the United States, Indonesia and Vietnam.