Cathay Pacific today released its traffic figures for September 2022, which continued to reflect the positive impact of further adjustments to the Hong Kong Special Administrative Region Government's travel restrictions and quarantine requirements. This notably included the removal of the mandatory hotel quarantine arrangement for locally based aircrew from 10 September and for travellers arriving in Hong Kong from 26 September.

Chief Customer and Commercial Officer Ronald Lam said: "Cathay Pacific's travel business continued to show improvement in September, helped by student traffic from both Hong Kong and the Chinese Mainland. Overall passenger numbers further increased month-on-month to over 8,800 per day, while load factor was 72.5%. Passenger flight capacity stood at about 16% of pre-pandemic levels.

"Demand for student travel to the US tapered down from the second week of September, but this was balanced by growing demand among UK-bound student traffic. As such, we increased the number of flights operated between Hong Kong and the UK from 111 sectors in August to 134 in September, with load factor on flights to London reaching 96%. We also added capacity on flights to Japan and Southeast Asia.

"Aside from student traffic, inbound traffic to Hong Kong also improved, largely driven by demand from the US and Canada. The removal of hotel quarantine arrangements for passengers arriving in Hong Kong was a very welcome development that has helped boost sentiment for travel. In the last week of September, we saw a considerable increase in demand for flights to Singapore, Bangkok and Seoul.

"On the cargo side, tonnage in September decreased about 21% compared to last year's exceptionally high level. We had reduced cargo flight capacity in expectation of this and operated fewer cargo-only passenger services on long-haul routes. However, the fall in demand compared with last year was greater than predicted, largely due to weaker consumer demand and reduced manufacturing activities in the Chinese Mainland. This prolonged the dip we typically see after the Mid-Autumn Festival and also meant the pre-National Day Holiday uptick was relatively mild. Overall last month, cargo flight capacity was approximately 61% of pre-pandemic levels.

"Looking ahead, we remain focused on adding as many passenger flights as we can, and have already added more than 400 flight sectors in October to and from regional and long-haul destinations since the September announcements by the Government. We have resumed passenger flights to five destinations this month - Madrid, Milan, Dubai, Kathmandu and Bengaluru - bringing our total number of destinations to 51 in October. As we said in June, our target is to double the number of destinations offered by the end of the year compared with the 29 we operated in January 2022, and we are on course to achieving that.

"We will continue to add more flights in the coming months. In addition to the flight sectors previously scheduled for November and December, we will be adding close to 700 and 1,200 sectors respectively. This will add more than half a million seats for passengers to choose from.

"Many of these additional seats are for popular destinations. For example, we already increased Tokyo (Narita) frequencies to 86 flight sectors and Osaka to 106 sectors in October. An additional 146 sectors in November and 234 in December will be operated on top of the sectors previously scheduled for Japan in these two months. This will add close to 140,000 seats over this period for fans of Japan heading to Osaka, Tokyo (Narita and Haneda, the latter resuming in November), and Sapporo (resuming in December).

"London Heathrow will also see a substantial increase in passenger flights in November and December. An additional 31,500 seats will be offered over the two months and on certain days in December we will be operating four flights a day. Customers can also look forward to the return of our First class offering on our prime London Heathrow flight, CX251/CX252, starting 5/6 December respectively.

"Customers have also had the opportunity to book our first ever 'Miles Flights' for travel throughout October. This has seen every available seat on designated flights to and from Hong Kong and Osaka, Seoul, Bangkok, Kuala Lumpur, Cebu, Manila, Hanoi and Ho Chi Minh City being opened for Standard Award redemption this month. In total, we have made more than 70,000 seats available and the response from customers has been very positive.

"Regarding cargo, as we resume more passenger flights, the additional cargo capacity provided by the bellies of our passenger aircraft will complement our full freighter schedule, enabling us to offer extended routings and more consistent services to our cargo customers. Demand from the Chinese Mainland softened over the National Day holidays, but is expected to firm up again in the latter part of the month. We remain positive that there will be solid demand over the traditional cargo peak period, and while it will not reach the levels achieved last year, we expect it to still be above historical averages." 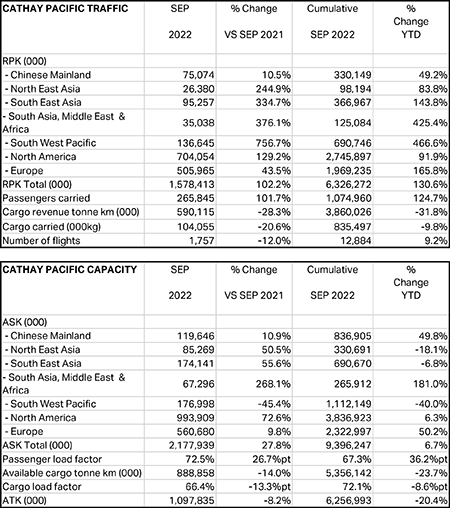 Available seat kilometres ("ASK")
Passenger seat capacity, measured in seats available for the carriage of passengers on each sector multiplied by the sector distance.

Available tonne kilometres ("ATK")
Overall capacity measured in tonnes available for the carriage of passengers, excess baggage, cargo on each sector multiplied by the sector distance.

Available cargo tonne kilometres ("AFTK")
Cargo capacity measured in tonnes available for the carriage of freight on each sector multiplied by the sector distance.

Revenue passenger kilometres ("RPK")
Number of passengers carried on each sector multiplied by the sector distance.

Cargo revenue tonne kilometres ("RFTK")
Amount of cargo, measured in tonnes, carried on each sector multiplied by the sector distance.